Alchemy On The River Dore

After the experience of last week, a fruitless trip to the River Honddu, Tuesday's destination required a little more thought and consideration.  The waters of the spring fed Honddu were bitterly cold and the river in parsimonious mood. A couple more weeks are probably needed before the place wakes up.  But what to do in the meantime?  Where to go to scratch that Spring fishing itch?  The answer lay in an oft neglected – at least by me - corner of the Monnow catchment, The Golden Valley.


The Golden Valley is wide in aspect and gentle in its curves. It is a place of sleepy hamlets, of timbered churches and ancient farmlands whose sweeping lowland meadows bely the witness borne to centuries-long ebb and flow of borderland turbulence.  And through it all flows the River Dore, in a scribbled course of curves and straights.  The French, or at least the Normans, assumed that the name of the river referred to D’Or - “of gold”, and so was born The Golden Valley.  The historical reality is actually that the word Dore is a bastardisation of the Welsh “Dwr”, which means water; ah well, you can take your pick:  prosaic Welsh or Gauloise romanticism.  Whilst I’m not sure that The Watery Valley would capture imaginations in quite the same way as it’s present name, as I drive up the valley towards Vowchurch, the day has a definite grey and watery feel, there is no golden aura, just a pewter dullness to a sky heavy with cloud cover.
Journey’s end arrives and I park up the car and stroll to the old bridge.  There is little breeze and in the slow water above the bridge small trout are feeding on a steady stream of olives.  Bingo.  This is what we came for, free-rising trout on an early Spring day.   But first there is business to be done in the frothing riffle and pool below the bridge where water cuts under the root covered bank to provide perfect trout territory. 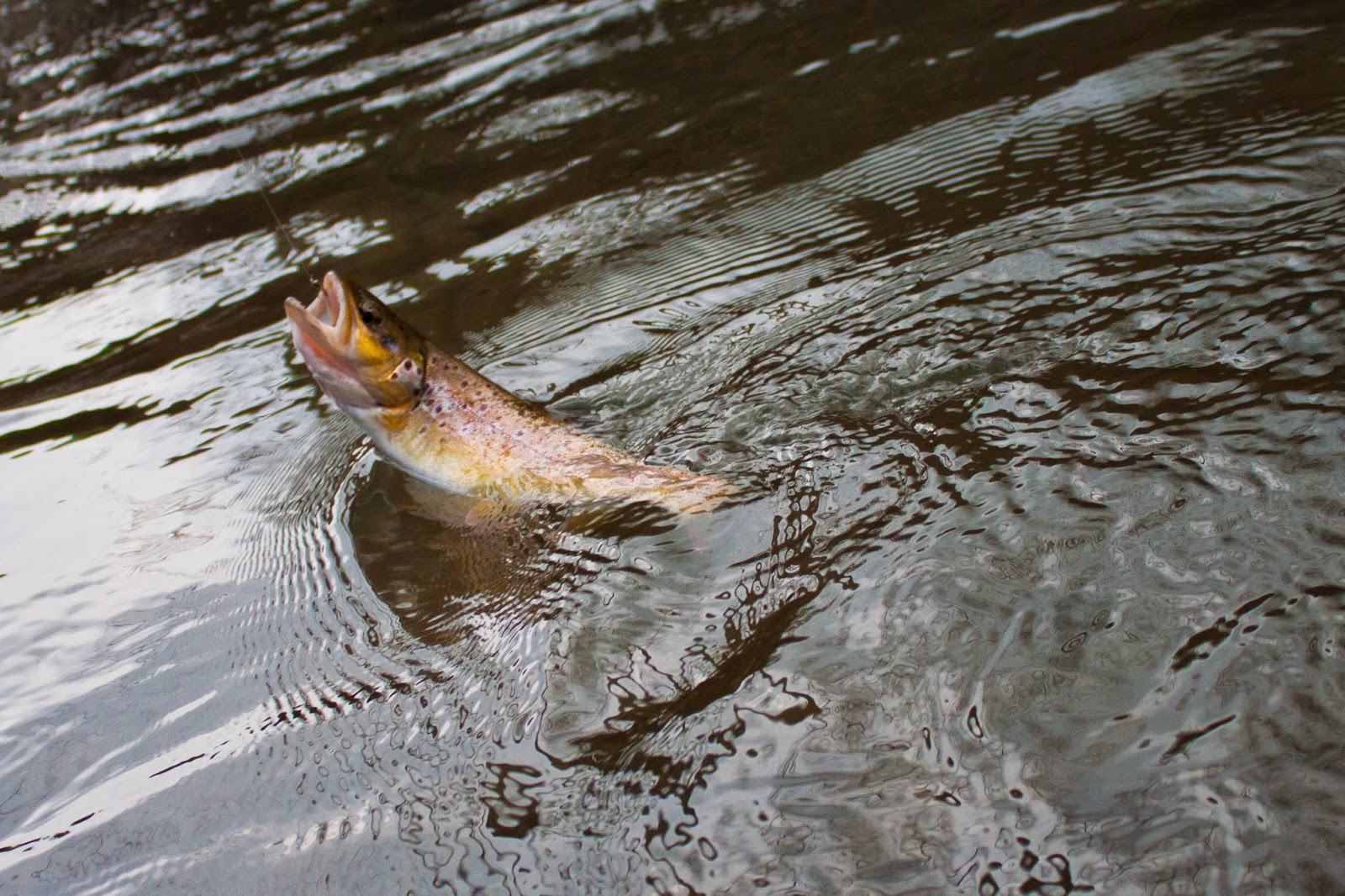 It doesn’t disappoint, a plump 10” fish comes to hand second cast.  These pools are one or two fish gigs at the maximum, so I progress to the flats above the bridge with three fish to hand already and the prospect of casting to rising fish waiting. 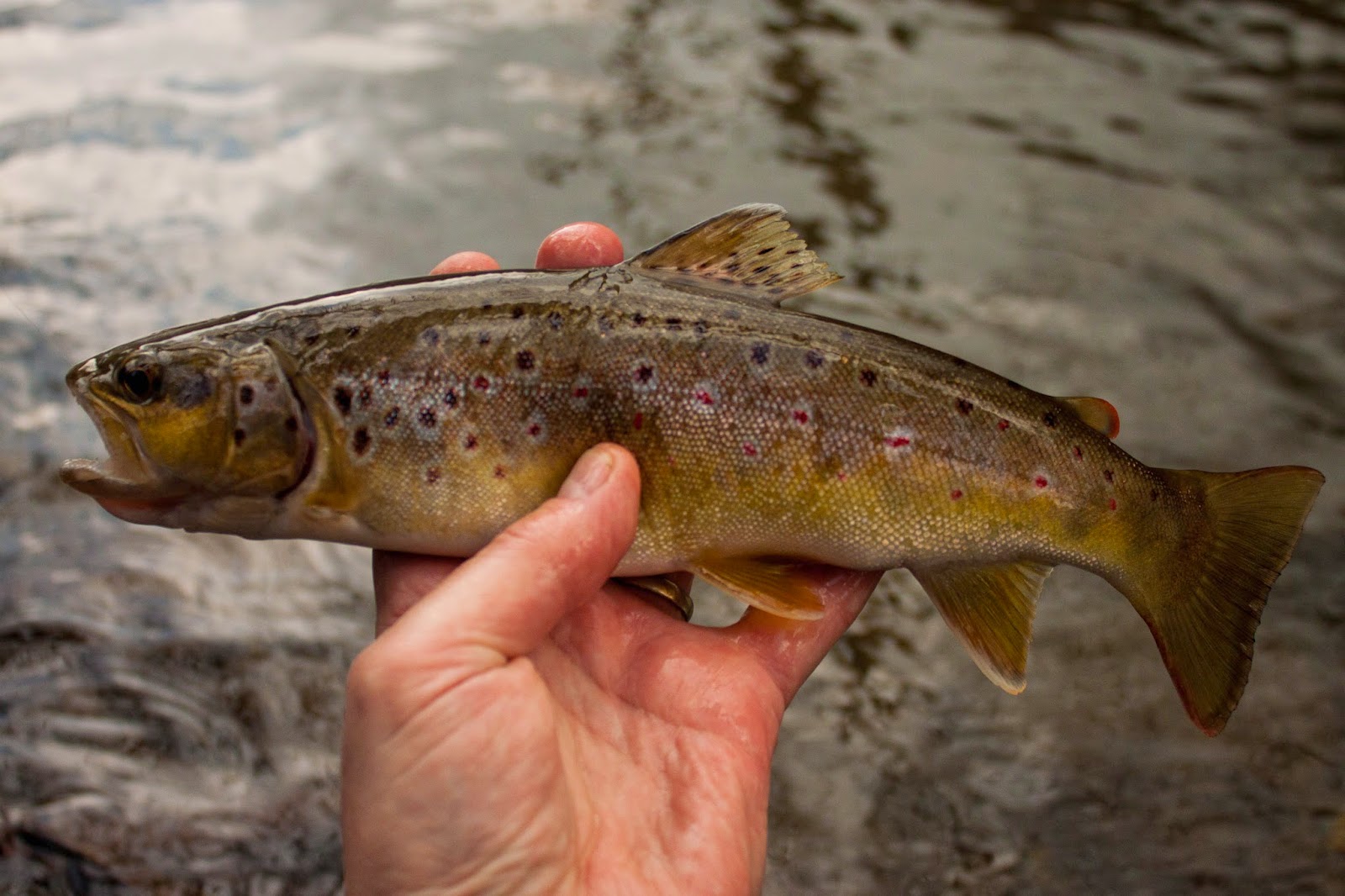 The fish are still rising confidently, mostly small ones but great to blow the casting cobwebs away with, and across under the far bank, just off a semi-submerged log something larger is stirring, a target for later, once we've got our eye in.  Typically nothing goes quite to plan, two small fish play ball but the larger one evades me.


Onwards and upwards we travel… which turns out to be a fair bit upstream where the river opens up into a series of delightful riffle and pool sequences, all full of promise and character.  The Dore has an undeserved reputation as being somewhat dour; lugubrious of nature, muddy and stygian in its depths.  Jon Beer featured it in his column once.  He didn’t like it.  He didn’t fish here though, here are crystal clear waters, flowing ranunculus and a stream song full of mirth and life. 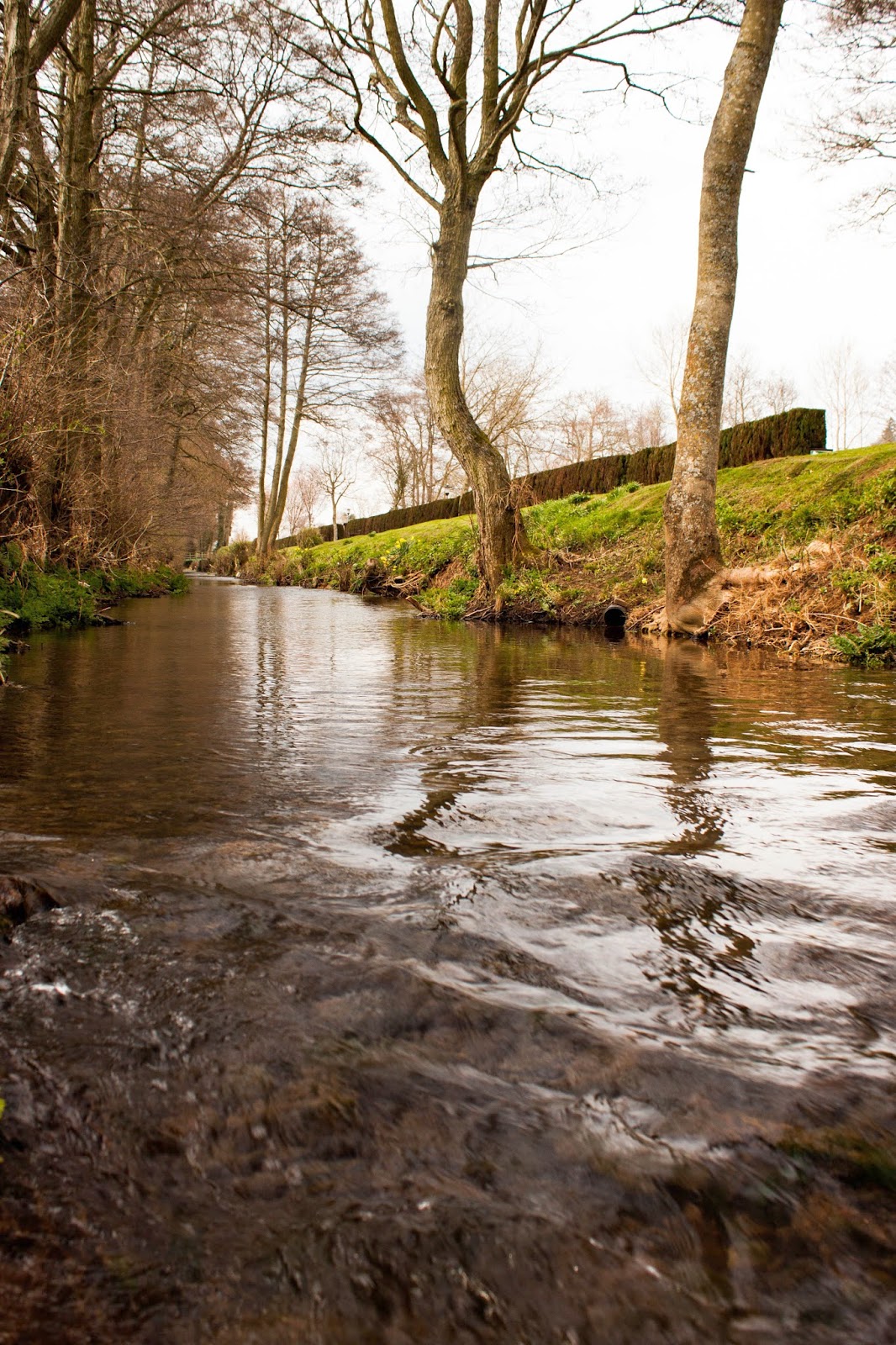 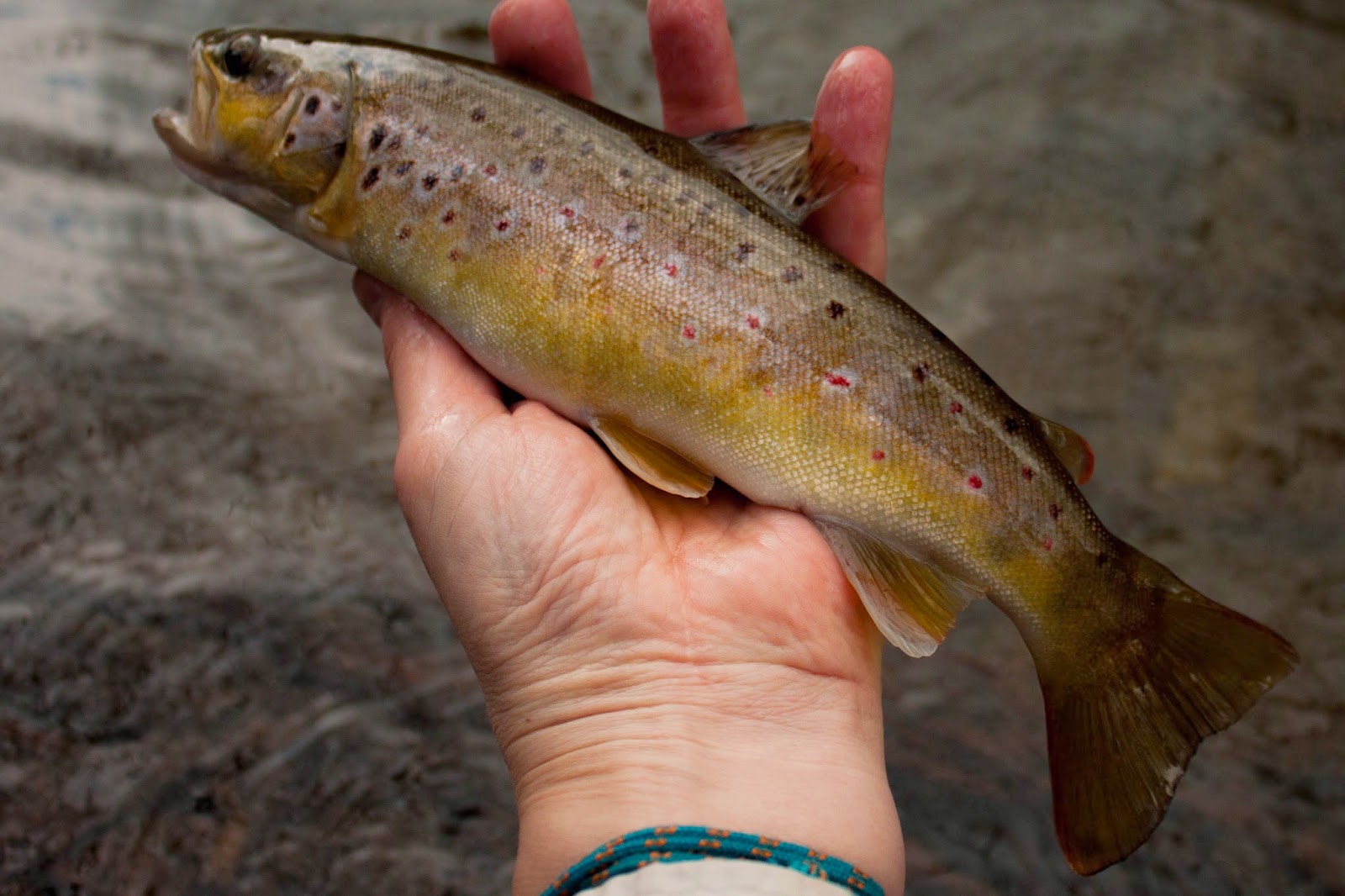 This is now Spring fishing at its best, each bend presents a different challenge with rising trout asking subtle questions from the shallowing tails of deep pools, and the faster rootside nooks and crannies hiding trout of surprising size and quality.  And such quality too, two consecutive drifts of a flashback nymph along a steep shelf bring consecutive fish of 12” and then a 14” bruiser which took and fought with a savage violence that left me trembling.  A real granddaddy of the stream.

I am now just in a zone all my own… searching, casting, watching and casting, feeling utterly in tune with this intoxicating stream.  A series of lovely fish fight their way into my memories and blaze a lasting impression with their beauty and condition.  One trout in particular reminds me of an old Golden Valley legend… that of the monks of Dore Abbey who once caught a trout around whose back was a golden chain, such was the burnished beauty of this fish that an impression was taken and a sculptor charged with carving its memory into the stonework of the abbey, where today it remains, its presence little known and less understood.
By now the skies have warmed and the pewter grey clouds have been rent by the mid-afternoon sunshine, kissing the water and its fishy denizens with the tinge of old gold.  The Dore has worked an unexpected alchemy upon the day and as I cast a line into the last pool of the day, I am left wondering if those Normans didn’t know a thing or two more about this little river when they named the valley Golden. 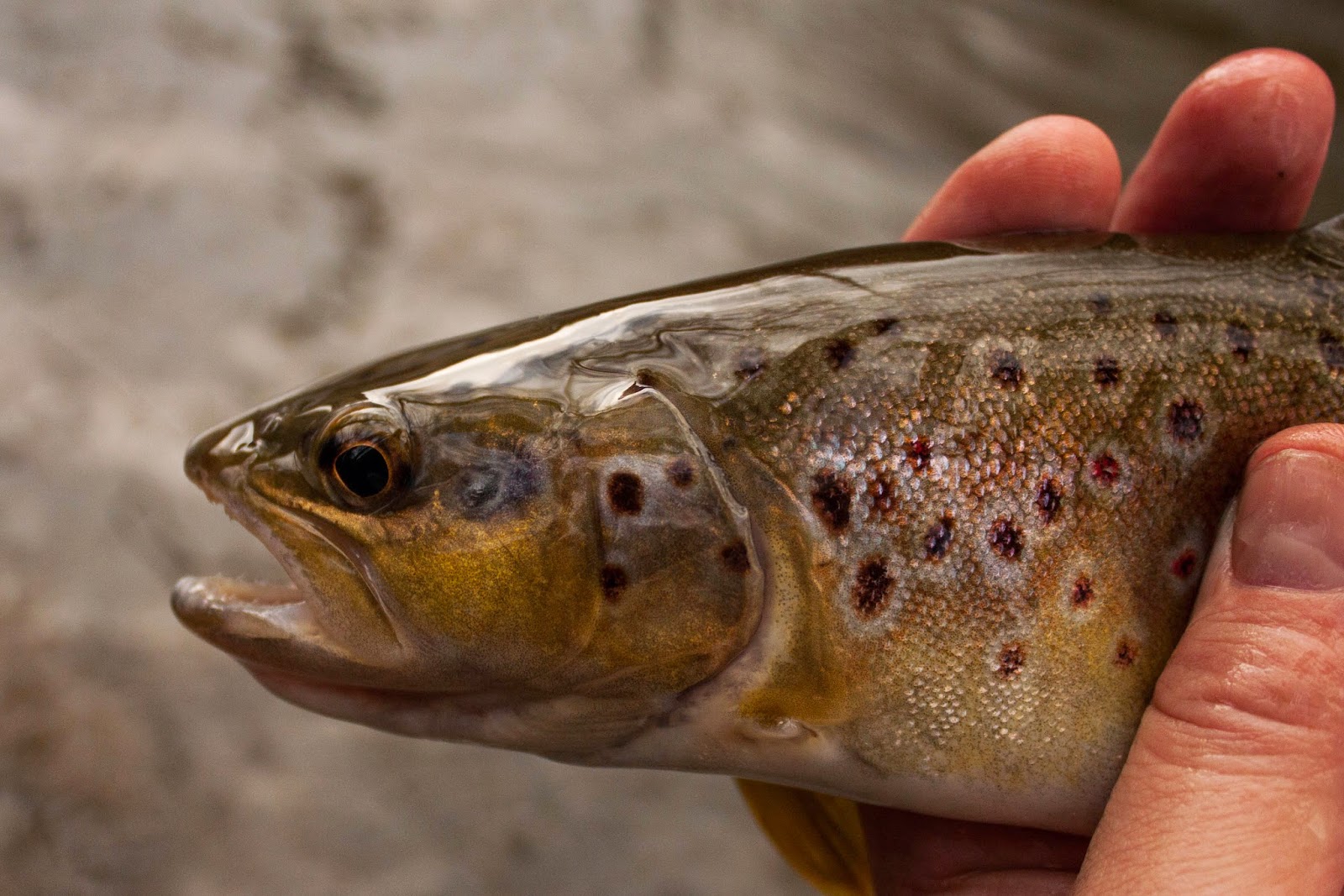 What to expect on the first day of a new season on the river is a fly fisher’s conundrum. There is though one element that retains certainty, the river itself.  A rough cascade, tumbling through a tight upland valley, its waters foaming and burbling though narrow straights and glassy slicks, with only the occasional pool affording it chance to catch its breath.  Gnarly trees stand sentry on its banks like old soldiers, their branches raised in defiance of every cast; their roots unyielding to the angler, offering sanctuary to wise and large trout.


Around me are reminders of the ephemeral nature of our season, The sight of daffodils and anemones emerging from dark, dank nooks in the riverside woodland, a chaotic assortment of farmyard noises announcing the painful emergence of new life; Spring is uncoiling, and with it surely, at least in the mind of the optimistic trout man, a new trout season is revving up to burst into life?  I am starting to learn that such optimism is usually wildly misplaced. Walks along the river reveal nothing as to the whereabouts of fish, indeed they indicate the contrary and perhaps that all of them have disappeared over the winter. Prospecting forays into banker pools go unrewarded; and those watch and wait vigils on the bank are generally just that.  Only previous experience reminds you this place holds a good head of fish, ranging in size from slender fingerlings to muscular brassy slabs with tails like shovels and pectorals like rudders.

The trouble with a new trout season is that we’ve been anticipating its arrival with childlike eagerness, expecting it too to be full of youthful exuberance from day one. The reality is that a River Monnow trout season rarely leaps from its bed like Lazarus, no, it emerges from its sleep gently and steadily, a slow, gracious wandering from the hall of winter’s slumber but it does have its moments…  Moments which were worth the pre-season preparations, the kitchen table-top mayhem, the blue-numb fingers and the getting out bed for… A first trout, plump and lively, tempted by a heavy nymph fished hopefully through the tail of a riffle, and a superb grayling, all muscle and liquid silver taken from a gentle gliding pool after a stubborn fight. 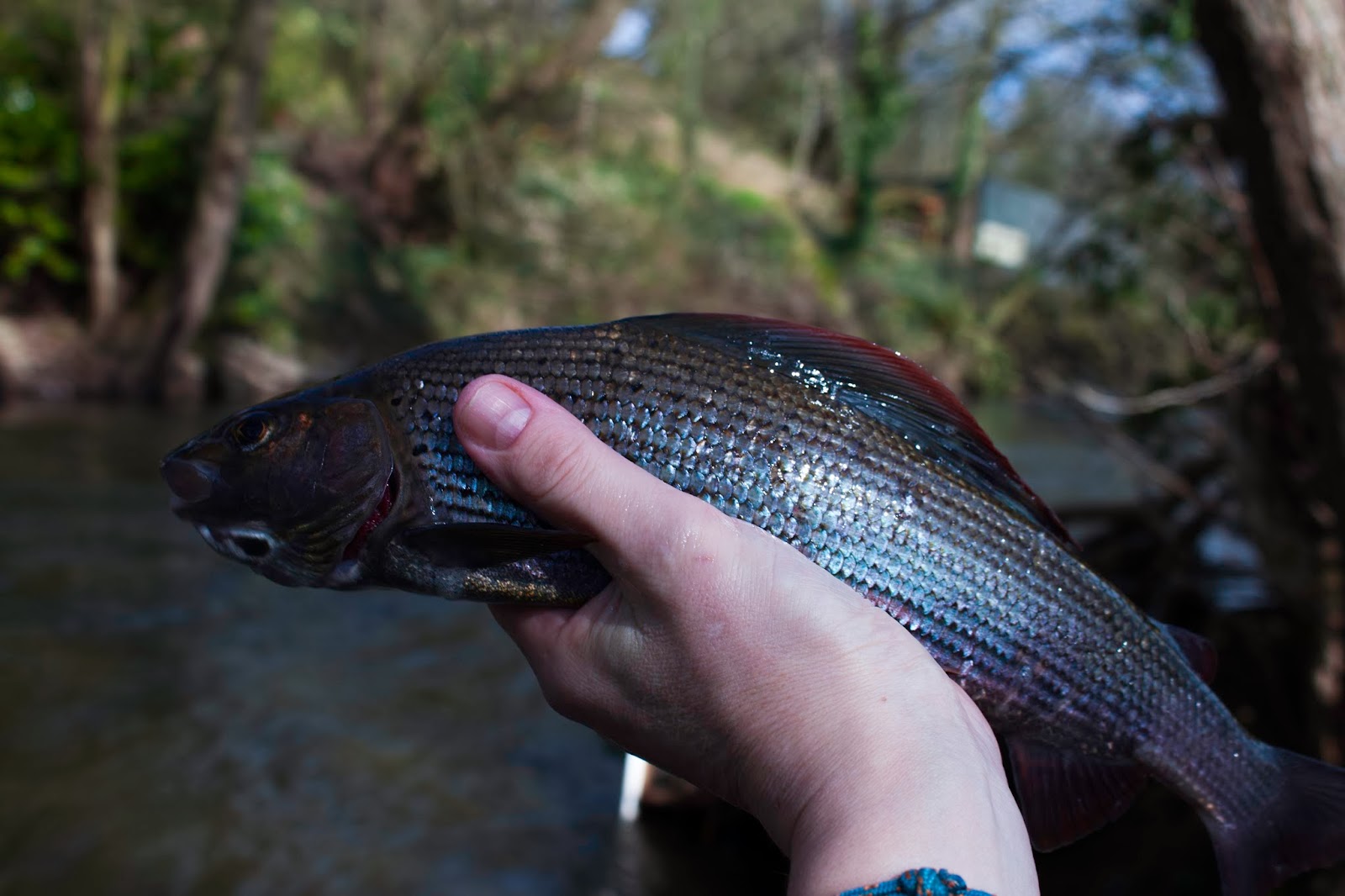 Such moments are what sustain dreams and remind that whilst there may not be expectation there can always be hope.
Posted by Unknown at 07:45 1 comment:

Visitors to this page